Oo-er missus!! Ahem.....just a quick post - I've been out at 'tumble tots' this morning. I've gone the last couple of weeks with my friend because she's got a toddler and a baby who's 4 months, so I've gone along to look after Chloe while she's running round after Joseph. I love it to be honest, I've never known a baby as good as Chloe, she's an absolute joy to look after and I love her to bits, she's just such a happy little soul!! Anyway, I'm gushing!! Who's been watching the craft day on QVC today? I have succumbed to the new Slice Elite - mainly because I was given some money to put towards one for my birthday in December. I've got the original one and I really do love it, the problem is that it doesn't cut through card, so it's not been much good for cutting out mats, etc but they've fixed that problem with the new model and apparently it cuts up to 300gsm. So now I'm selling my old Slice, if you or you know anyone who'd be interested!!??
I've got a card to share with you - it's another one that I've made for 'Just Some Lines': 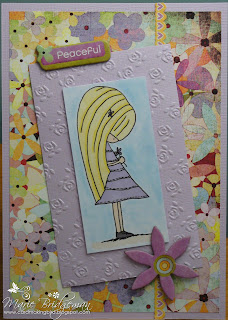 Dont'cha just love that image?? It's coloured with promarkers and I've used chalk in the background. The papers/chipboard embellies are all Basic Grey Kioshi and I've embossed some Bazzill Basics purple card with my cuttlebug and an embossing folder. I'm entering it into The Sweet Stop sketch #91. And now I'm off to get my DS from school. Til next time......

Posted by cardmaking bird at 14:59 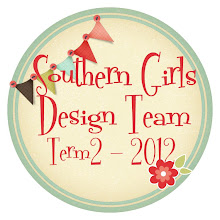