Hi Everyone. When I said I'd be back tomorrow, it's cos I've got some exciting news to share with you - I'm now on the DT for The Crazy Challenge!! For my first challenge, we had to be inspired by this photo:
And I came up with this card - I hope I wasn't too wide of the mark, I used the colours and got the elephant in there! 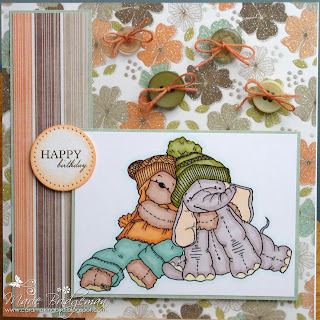 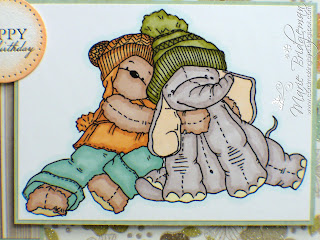 Ingredients:
Image - Teddy Bo coloured with Spectrum Noirs and Promarkers.
Papers - First Edition New Leaf.
Sentiment - Craftwork Cards.
Buttons - Woodware.
Other - WRMK thread coloured with promarkers.
Isn't that paper yummy?! I've fallen in love with First Edition ever since they starting producing paper pads and I think I've got almost every one they've released. And how cute do Teddy Bea and Olifant look? Now not a lot of people know this but I named 'Olifant' - Gayle, the owner over at Teddy Bo was asking for suggestions and I emailed her suggesting the name, which is South African for elephant, apparently and she liked my idea! And what d'you think of my colouring again? It's funny actually cos now I've got the hang of shading a bit more with the Spectrum Noirs, I seem a bit better at it with the promarkers!?!

I'm also entering my card into the following challenges:
Right, I think that's about it! I've got a big week this week cos Sam's gone back to school after half term and he's going to be walking to and from school on his own - eeeek! He's been on at me for ages but I always said he's too young but now he's in the last year of primary school and we've worked out a route so he doesn't cross any roads that don't have lights or a crossing, I've finally let him. But I'm gonna be a nervous wreck until he rings me just as he gets to school and before he gets to the front door in the afternoons. I guess you've got to let go sometime, haven't you?!? TTFN..............xx